Who is Tekel Ingram

Tekel, although not defined by a role – currently employed as a Network Coordinator – is an ambitious, enthusiastic, fun-loving, vibrant person. Tekel has a genuine love for IT, networking and Linux administration. His relationship with technology can be considered symbiotic after all IT is IT. He currently holds a BSc and MSc.

How did you get started in Tech?

While in 6th form at Kingston College (KC) in Jamaica, I did not apply for further studies, I must have been of one the few who did not. I left school with my CXCs and A ‘Levels and was at home for a few months until I got a job within the Public sector, I did a few odd jobs before the Ministry of Finance (MOF) came calling, April 2005.

It was while working as a civil servant in the Public Sector Establishment Division (PSED) registry at the MOF in 2005 I became colleagues with members of the IT team, called the Information Service Unit (ISU). I liked what they did, and when it came time to further my studies, it was either IT or business. Business, at that time, was too saturated so I chose IT. I applied to the University of Technology to start school 2006 and was successful, but had to defer because of financial reasons, so I actually started in 2007.

I moved on from the PSED to the Financial Investigations Division (FID) in 2006. While at the FID, I acted as Registrar for several years due to the position not being vacant, upon conclusion of the acting I was to revert to my substantive role at the PSED. Based on my work ethic and attitude when the acting concluded, and I was assigned to the vacant role of Records Officer, this role was higher than the one I would have reverted to.

I did not get into the field until 2010 though, when Harry Campbell, one of my mentors, then IT Director at the Accountant General’s Department (AGD) gave me a foot in as a Data Entry Clerk. Although limited in job scope, Mr Campbell ensured I was given the freedom to take on additional tasks to sharpen my technical skillset. From there I would assume other roles within the AGD from Hardware Technician to Client Support Supervisor. I even got the opportunity to act as Network Administrator for a short stint. It was while in the role of Client Support Supervisor that I flourished, with the support of Mr. Campbell and a team to assist, we were able to optimise IT service delivery and performance for the AGD during a transitional period.

I then returned to FID as Systems/Network Administrator and remained in this role for approximately two (2) years. The desire to further my education along with wanting to grow professionally and personally resulted in me accepting an offer from Barita Investments in 2015. This was the genesis of nothing short of greatness. While there, I was introduced to one of the greatest IT minds and human beings I have ever come across, Mr. Exdol Taylor. While at Barita as their IT Network Engineer, with Mr. Taylor’s astute leadership, we were able to do some remarkable work. I fell in love with IT while at Barita, what I had before was an affair 😀 … I had found my utopia and would remain in holy matrimony for the rest of my days…

As the saying goes, all good things must end, and when Barita was acquired, this signalled impending changes. Being the proactive person I am I started looking for opportunities outside of Jamaica which landed me in the Cayman Islands. Leaving Barita remains one of the most difficult choices I have had to make in my journey so far, but it was necessary as growth is never easy. There isn’t much to share on my experience in The Cayman Islands suffice to say it gave me a greater appreciation for Jamaica.

If you weren’t in Tech, what other paths would you have taken?

Law, as I always had a love for criminal law and defending those who cannot defend themselves.

What’s next for Tekel?

Next step from an IT perspective is to be a Technical Manager. Preferably a role in implementing more technical savvy solutions. I don’t just want to be in a position of oversight I want to be in the thick of things.

Some crucial advice to others interested in a career in Tech?

If you don’t love it, leave it alone. Balance is necessary, never stop learning as IT continually evolves, and keep abreast of changes. Be willing to put in the work, as it is not easy, like anything of worth you have to be willing to work for IT (see what I did there). Have a structure about what you want to do, a path is necessary, certifications have a very short life span when compared to days of old (literally 10 years ago), so keep at it. “Remain relevant”, should become a trending hashtag.

Grown folk would say this to geldings coming up, “the sky is the limit”. This I have proven to be 100% true, whatever you put your mind to you can actually achieve it.

Chart your path, emulation is good but understand that your time and your path differ from those taken by others. Self-belief is key. If you don’t believe in yourself who will? Take the good with the bad. You will have good and bad days, enjoy the good ones and survive the bad ones. And most importantly be patient, know while not being where is desirable you cannot wait to leave, but being impatient will not make things move any faster.

You can reach Tekel by:

CCST members have a wealth of benefits at their fingertips, such as sponsored books, online courses, job boards, entrepreneurial support, and instant international networking. If you’re from the Caribbean and either working in or interested in a career in IT, join today! Download the Discord App and click the invite link below.

CCST is an initiative of The Gavin Dennis Foundation Ltd., a registered non-profit organisation in Jamaica. 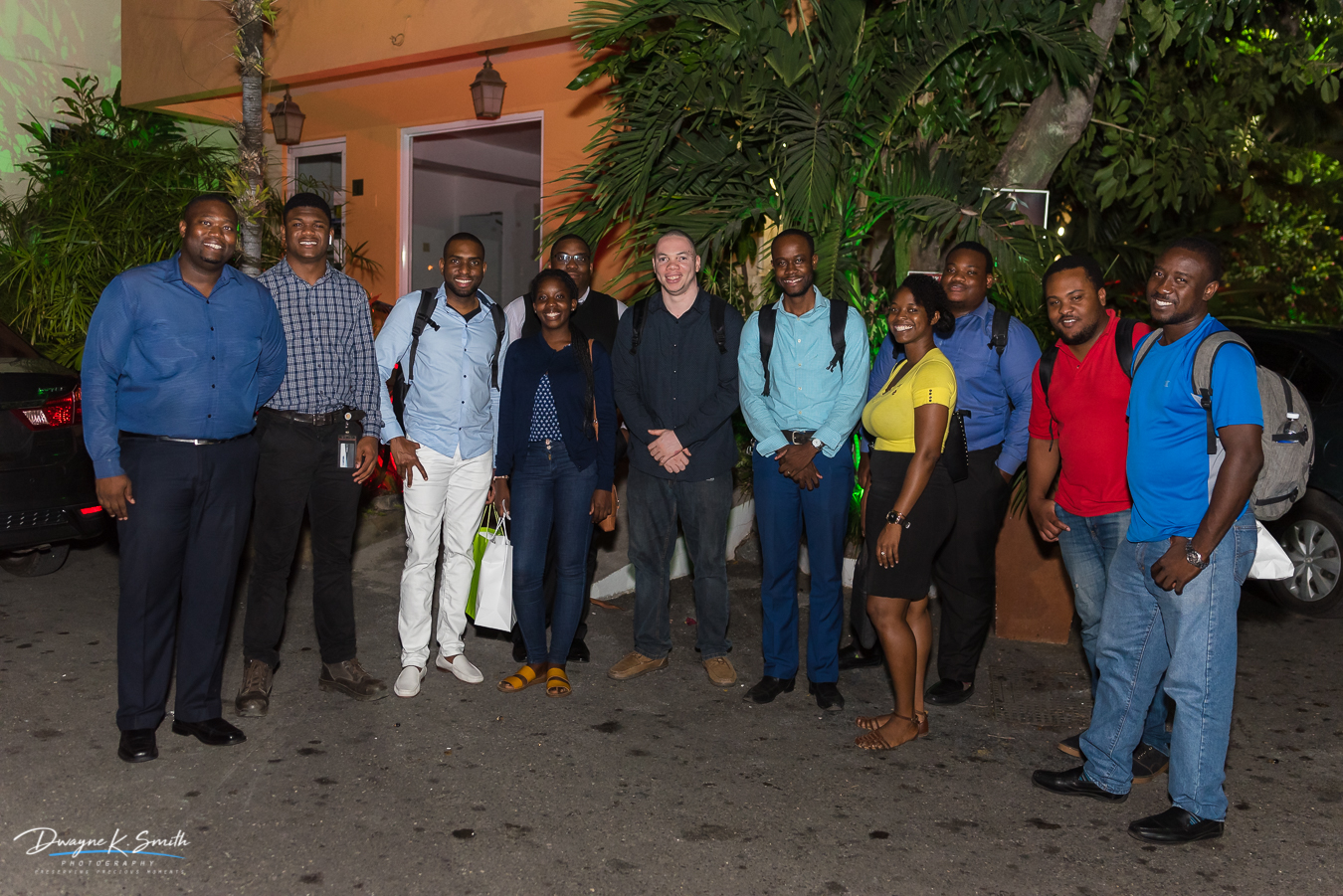 What happened this year in CCST

It’s been a wonderful year filled with support from our 200+ members. We ended this 2019 with a…
G5 Cyber Security
Read More 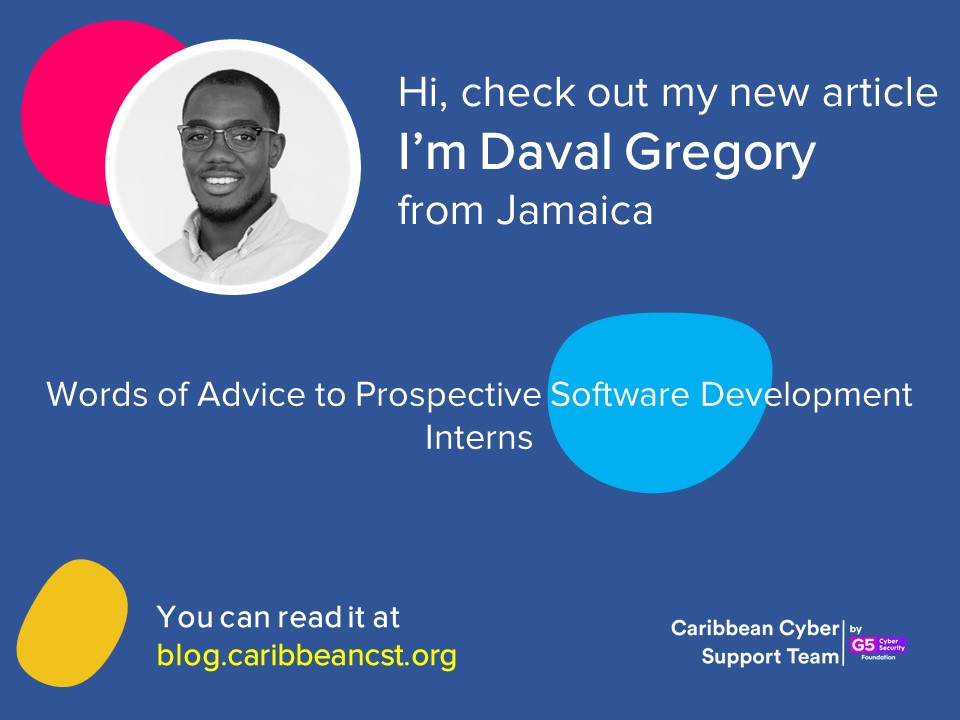 Many times as Software Developers, we can be so prideful of our abilities which leads to a lot…
G5 Cyber Security
Read More