Who is Maya Archie?

I am a working professional and a mother with a toddler who is very active. Due to my job I  work, basically 24/7, 365 days (including holidays and weekends).

Why do you work so many hours, what do you do?

I am a control room operator. So, I’m required to work all the time. So, I am always on the go. If not at home with my son. I am constantly on the move for work as well.

Where are you from, and what’s the IT industry like?

I am from  The twin-island republic of Trinidad and Tobago. In Trinidad, the Information Technology sector is continuously growing, so it always has a lot of opportunities. Most places are currently becoming up to date with the implementation of Information Technology into their businesses. So, usually, they are trying to keep up to date with everything.  I cannot say they are behind, but some are trying to catch up with the rest of the world, therefore, creating a lot of opportunities.

How long have you been in your current role control, and is it your first IT job?

No, it isn’t. Most of my jobs usually are trying to get companies online where regarding their bookkeeping, accounting, and stuff like that. So that is often where I come in with my jobs before or I am either trying to update the system or training persons. Most of the jobs I’ve had I held multiple titles as well.

Did you take the university route or currently hold any certifications?

I did one or two certification courses after leaving high school. I also worked during that point. It is CompTIA. I studied at one of the universities. The university was offering the opportunity to do one of these small courses as a prerequisite.  I have CompTIA A+ right now and certification in computer repairs.

He is a boy and almost 2, he is 19 months. His name is Ángel (note the accent over the A) it is Spanish. He is now learning to talk, but before that, we would teach him sign language so he can better communicate with us. This would have given us a better idea about what he wants. It is very easy for him to pick up on a lot of things, especially when he starts moving his hands in the proper  form

I guess, because most of my time is spent with him, I did not want him to be at risk of not being understood. I’m also currently teaching him to speak English, Portuguese and Spanish. His father is Portuguese. For most persons in T&T, they have a basic understanding of Spanish. Spanish is the second official language of Trinidad and Tobago. I think that is mainly because of the Spanish influence in our country as well as how close we are to Venezuela.

You are teaching your son sign language. Please tell us more about that.

He can speak, but the plan is that he can talk to us (the adults) when he cannot or doesn’t know which words to use. It is a good opportunity to teach them while they are young because when they get into schools, you never know who they are going to meet. Basically, in Trinidad, you have children who are hearing is impaired or partially impaired that go to a regular primary school who even though we have schools for them. So you’ll have those who won’t be using sign language, some before their parents haven’t realized that they are deaf or those who are partially deaf in pre-school, you don’t want them to feel isolated that they can’t communicate with any other person asides from their teachers  I thought it would be a good idea in addition to him communicating with me. It can be an asset to him when he starts school.

It is a task trying to raise a multi-lingual child. He gets some words in English, some words in Spanish and some in Portuguese, so it is just for me to piece them together.

How do you find balancing work and family time?

I would say it is hard. However, you must know that when you leave work and you get home, it’s just to switch off from work and leave it there. Sometimes you’re not able to do that, but you have to make sure that there is some sort of balance, mainly because my son is a very demanding child, seeing that he’s up and down and all about right now. He is very active.

What motivated you to get started into IT?

Since I was 9 years old, I wanted to do programming and stuff like that. I have uncles who are programmers. It would sound weird to say that it is in my blood, but I can’t think of it any other way.

If you were not in IT right now, what other career fields would you choose?

I would be a healthcare professional.

Aside from being in IT, I always had a plan. In case IT did not work out for me, I was also attended nursing school so that I would have been a failsafe. It is a more practical route.

What advice would you give to other women and girls interested in a career in IT?

I would tell them if that is what you want, go for it! You can start. There are a lot of opportunities during school time.

Do you feel outnumbered by men? Do you feel like you are treated unfairly in the IT field in your country?

I do not feel as though I am at a disadvantage because sometimes the men would not look like a problem in which I would assess it. I would say I am at an advantage to them because I have a fresh pair of eyes to look at something. In addition to being outnumbered, definitely! Because they a handful of women in my department. So, yeah, we need more women at IT in my country.

Why did you join the Women in InfoSec group?

I saw the ad multiple times, and it’s something that piqued my interest. Initially, I just wanted to see what it was about. I became very interested because there’s a handful of women in IT. I thought it might be one of the only ways that I might find other people (women) in IT. It is always about a learning experience for me. So, this would be other people that I can learn from who have mutual interests.

What do you think of the WISC group so far?

I think it is a great bunch of people! Some of them are very much motivational. There is a great mix.

Final words of encouragement would be so the young girls. If you know something, do not be afraid to say it if you can provide a different perspective. Because half the time, most people are looking at it from what they have encountered before.

How to reach Maya

You can connect with Maya Archie through:

New Microsoft Edge features will save you money when shopping online 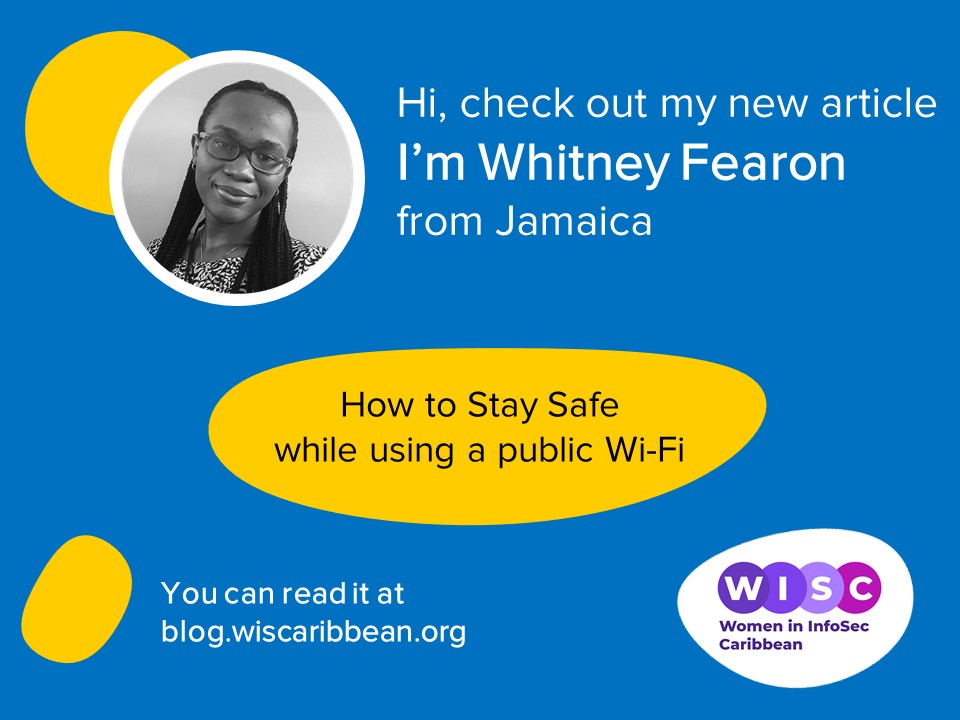 How to Stay Safe While Using Public Wi-Fi

Did you know that many free public Wi-Fi networks are not secure? As the availability of public Wi-Fi…
G5 Cyber Security
Read More

Dear Valued Member, Your account has been blocked due to the number of invalid login attempts. To regain…
G5 Cyber Security
Read More

InfoSec for Caribbean Women and Girls

It’s a well-known fact that men outnumber women in the Information Security (InfoSec) industry, even more so in…
G5 Cyber Security
Read More